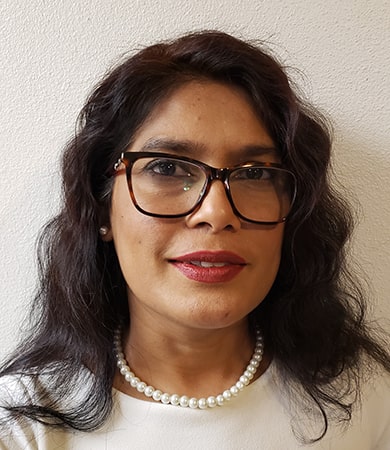 Prithy Madhoo is the Risk and Safety Director at Evergreen Goodwill of Northwest Washington. She has been a multi-site EHS SME for over a decade and can testify that “both herself and safety have evolved” – Change has been a constant in this field.

Prithy believes that an organization has the potential for greatness if every person can say “Yes” to being treated with dignity and respect, to having the tools to make a contribution and to being recognize for their ideas. – Paul O’Neil

At the age of 29, she started as a Front Office Clerk at “The One & Only Le Touessrok Hotel, Mauritius. Prithy soon realized that without a high school diploma, it would be difficult to advance her career. She went on to finish her high school diploma with the University of Cambridge, while working her full time job and raising her two children. After gaining her high school diploma, she joined the Ministry of Health & Quality of Life as Word Processing Operator. In 2006, she was presented with the opportunity to pursue a BSc in Occupational Health, Safety & Environment Management at the University of Technology, Mauritius. In 2007, she joined the OSHA Department at the Ministry of Labor as HSE Officer. Prithy enjoyed high success as a HSE Manager at Taylor Smith Group, Mauritius. In 2019, Prithy received her MBA in Innovation and Leadership from University of Mauritius in collaboration with Ducère Business School, Australia. In 2014 she joined AMT Senior Aerospace as EHS Manager, where she gained enormous success in her field and implemented various programs to reduce environmental impacts and injuries in the aerospace industry.

Prithy was born and raised in a small village in Mauritius, a tropical island in the Indian Ocean. In 2014, she migrated to USA and settle in Arlington, WA with her children and husband.Prithy’s career success has been attributed to her humble and can-do attitude mixed with her serious but smiley nature and her family support. She is very passionate about Environment, Health and Safety and her compassion allows her to establish great rapport with employees and co-workers alike.

Prithy’s parent, children and husband have been the real strength behind her success. Prithy enjoys travelling and is a fan of fusion cuisine. In her part time, she educates herself by reading blogs or watching videos in Health & Safety, real estate investment and stock market. She speaks, reads and write 4 languages namely French, Creole, English and Hindi. She is a firm believer that “dreams don’t work unless you do”.